Popcorn is a snack that feels wholly American. It is enjoyed at every American movie theater, popped in every American household, and was said to have been enjoyed at the first Thanksgiving feast. Yet, this tasty snack existed for centuries before the Mayflower landed in Plymouth, and, though we hate to admit it, popcorn being at the first Thanksgiving is actually a myth. So, why does it feel so American? The answer is simple: Popcorn has been ingrained in American culture. It was enjoyed by the pilgrims and Native Americans, popularized on the streets of Chicago, and rose even further with the Hollywood boom. In this blog, we’re going to take a look at the man who made popcorn a commodity consumed by the American masses. It’s our tale of popcorn history, if you will.

A Short History of Popcorn

Popcorn can feel very modern. We stick it in the microwave and within a few minutes are enjoying it with friends in front of a movie. But, surprisingly, there is a long and rich popcorn history dating back a millennium! Archeologists have found traces of popcorn in 1,000-year-old Peruvian tombs and consider it an important dish to native Central and South American civilizations such as the Aztecs. In fact, these ancient civilizations would decorate using popcorn during ceremonies and young women would perform a " popcorn dance."

Popcorn was also a tradition for native tribes in North America, and European-Americans from New York, Vermont, and Quebec soon became the earliest popcorn makers. Popcorn was a common dish within America by the mid-1800s and, surprisingly, was used as a breakfast food. Popcorn would be placed in a bowl and eaten with milk, making it a precursor to cereal.

Entering the 1900s, the popcorn boom began. With the advent of the popcorn machine and the movies as an outing, popcorn became widely consumed all throughout America. Even through the Great Depression, the popularity of popcorn rose due to its affordability. Popcorn even survived the popularity of at-home television, with stovetop and microwave popcorn bringing this beloved snack to the heart of our homes. 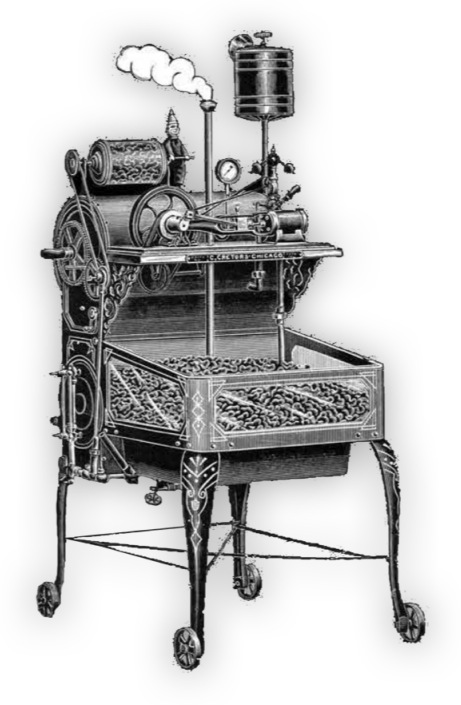 Who Invented the First Popcorn Machine?

Charles Cretors was a candy-store owner born in Ohio in 1852. Unknowingly, he would take a great step in defining American culture when he bought a peanut roaster, hoping to offer freshly roasted nuts at his shop. Funnily enough, it all began when he became aggravated at the machine's performance. Deeming it inadequate, the frustrated Cretors began to tinker with the peanut roster, creating a new machine that would combine simplicity, utility, durability, and elegance. Within a few years, from that single peanut roaster, Cretors had designed an entirely new contraption—one that popped kernels and roasted peanuts as well.

This new machine was powered by a small steam engine and distributed heat evenly so that a maximum amount of popcorn would be produced. Additionally, it was the first device that could pop popcorn uniformly in its own seasoning, making the delicious product the same each time and perfect for mass distribution.

The machines were quickly designed with the idea of moving it about to any location where people could do the most business, which was a great advantage over all other machines.

In 1893, Cretors brought the machine to Chicago's Columbian Exposition. After giving away the tasty snack for free, people realized how delicious it was. It was an instant success, with people waiting in long, winding lines in order to purchase a bag. The popcorn craze had officially begun. Chicago would soon become the home of Cretors' popcorn-selling endeavor.

By 1900, Cretors designed larger horse-drawn wagons so that popcorn and other snacks could be transported and bought on street corners throughout the city as well as outlining suburbs easily and efficiently.

Cretors would make another great contribution to popcorn history beginning in the 1910s with the use of electrical power in his machines by creating a new market for indoor locations. Retailers began moving their machines off the streets and into their shops. While steam power was perceived as complicated and not safe, electrical power was quieter, cleaner, more efficient, and more adaptable. Cretors designed several electric-powered machines that eventually outsold the number of machines powered by steam. Today C. Cretors and Company continues to hold the oldest UL active number, EA 4175.

With the movie-going experience growing in popularity in the 1920s, and the low cost of popcorn, the idea of selling popcorn in the theatres instantly became desirable for theater owners. Cretors' electric powered popcorn machines became a fixture in movie theatres that could satisfy movie-goers desire for the salty snack as they enjoyed their film.

This tradition, as you know, has been held to the present day. So, the next time you are munching on popcorn in a dark, cozy theater, be sure to give a quick thanks to Charles Cretors.

Bring the Magic of Popcorn to Your Establishment with Cretors

Popcorn makes every trip to the movie theater a little bit sweeter. Choose concession equipment that has proudly served customers around the world since Charles Cretors, the inventor of the first popcorn machine, founded our company over 137 years ago. We are honored to continue the concession popcorn tradition of generations prior and welcome you to be a part of our story.

To learn more about Cretors' concession food equipment and supplies, contact us today.